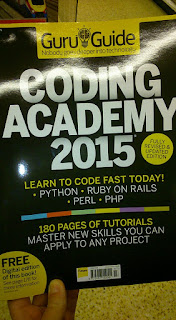 Perl 6 not as frightening as you thought it was.
Posted by Jomathan Stowe at 21:56